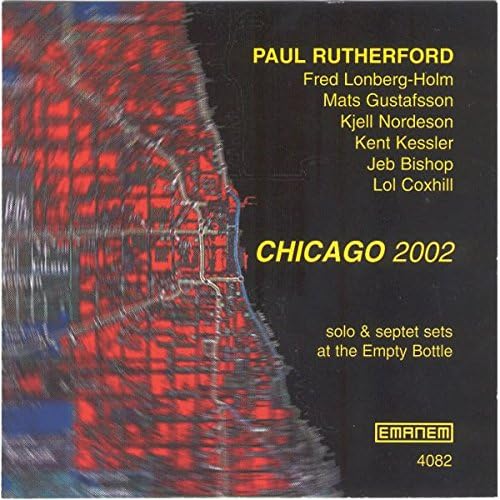 Last year, Emanem released Trombolenium (1986-1995), an impressive series of snapshots of Paul Rutherford's improvised trombone solos. In the sleeve notes of that album, Emanem boss Martin Davidson welcomed Rutherford's recovery from his serious illness of 2001 and also said it might be time for a new solo record. Well, here it is. It records Rutherford's appearance at the Empty Bottle Festival in Chicago, in which he performed solo and in a septet. Even more than with his recent contribution to Amassed by Spring Heel Jack, it confirms that Rutherford is in fine fettle.

The solo track here, "Bottling Up", lasts for over half an hour. In that time, at his own pace, Rutherford demonstrates his strengths; a variety of tones (not least his beautiful, vulnerable, human tone), his use of the full range of his instrument, his lucid, flowing phrases, his focus, his energy. As Spring Heel Jack's Ashley Walessaid of Rutherford's solo playing recently, "He is playing beautiful notes, notes you recognise, sequences you recognise. Some of it sounds like Vaughan Williams".

Rutherford's sense of occasion and sense of humour also shine through as he quotes a phrase from "Strangers in the Night" (no, I didnt believe it either!) - maybe there was some essence of Sinatra in the Chicago air that night...

The first of three septet pieces, "Loliloquy", is a showcase for Coxhill. It slowly gathers momentum and has a melancholy air to it until an unaccompanied solo feature for Lol midway through. But it's the final three minutes of the piece that really kickstart the septet and set the pulses racing, as all seven players engage in a bout of full-tilt all-out blowing - the kind of stuff that gets people hooked on improvisation (or, yes, totally alienates others!)

"p"On the other two septet pieces, "Blue Bottle" and "Bottle Out" (typical Emanem titles), Rutherford himself is more prominent, but the level of intensity and whole group interaction is consistently maintained. It may be unfair to single out particular players, but Gustafsson's raw, throaty tenor and Lonberg-Holm's use of electronics and distortion both grab the attention. Thrilling stuff. --John Eyles

This post was contributed by guest blogger Daria Shcherbakova, a faculty member at Albert Einstein College of Medicine. Several sets of near-infrared fluorescent proteins (NIR FPs) and biosensors have been created recently. As developers of many of these probes, we decided to ...

Every few months we highlight a subset of the new plasmids and viral preps in the repository through our hot plasmids articles. These articles provide brief summaries of recent plasmid deposits and we hope they'll make it easier for you to find and use the plasmids you need.

Three Tips for Preventing Viral Plasmid Recombination in Your Samples

Working on the scientific support team at Addgene, I get to see everything that can go wrong with a plasmid. One of the most frequent problems that I help troubleshoot involves viral vectors and plasmids with repeating sequences. Repeating sequences within a plasmid can undergo ...

Welcome to the Lab Bench! New Protocol Series Helps Trainees Get Started in the Lab

New to the lab? Or looking for ways to supplement your teaching? You’re in luck! Addgene’s new Intro to the Lab Bench series was born from the shift to remote learning due to COVID-19. We had many protocols for plasmid cloning and working with viral vectors, but what we lacked ...

Antibodies are used in many different experiments that require scientists to detect proteins in their samples. One technique that relies heavily on antibodies is ELISA, which stands for Enzyme-linked Immunosorbent Assay. ELISA are used to detect proteins within a 96- or ...

We’re making some moves over here at Addgene...and they’re looping?

Sharing science just got easier... Subscribe to our blog

Addgene is a nonprofit plasmid repository. We archive and distribute high quality plasmids from your colleagues.